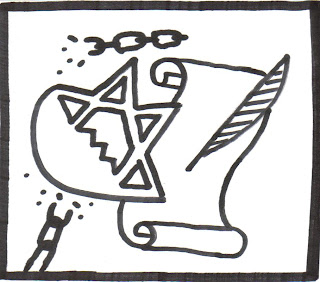 Who’s been thinking the same thing but is afraid to admit it? What do I mean? What I means is; you are so thankful for being brought to the revelation of Truth of the Jewishness of Messiah and the Truth of being Torah Obedient within the footsteps of Messiah that you do not in any way question or plan to turn back on these things, but if you were brutally honest with yourself, your spirit was happier (despite the paganism and denominational politics) in Christianity. There, I said it! Stone me if you wish, at least I will die an honest man. I am secure in the Truth and Faith I have found in Torah to admit that. Are you?

People are afraid to voice this perhaps because it would be seen by others as a form of Messianic/Natsari Backsliding or getting soft in ones newfound faith and convictions regarding Torah.

So the million dollar question that stands as tall as a multi-story skyscraper, in bold, underlines letters of triple exclamation is:

We could blame the Natsari cults and red-flaggers trying to highjack our faith and harsh our buzz, but that would be a cop out. For we are responsible for our own spirituality and if we are not a part of, but rather exposing such groups it should have no pending upon our spiritual life except feeling the righteous indignation Yeshua felt toward the Temple moneychangers.

So why were so many of us happier in Christianity?

1.     Many of us have taken a black and white, all or nothing approach and attitude towards Christianity, because we feel betrayed by it and are disgusted with the paganism within it that we swallowed for so many years. Thus we throw the baby out with the bath water and anything labled “Christian” or “Jesus” we curl our lip in disgust and say, “Bah!” with a dismissive hand.
Christianity is not perfect, but neither is Natsari Judaism and the vast majority of Christianity is steeped paganism via ignorance and this ignorance God winks at (Acts 17:30) until our revelation of the Truth of Messiah and Torah is revealed personally to us. It’s true, else we would have never received the revelation and be Torah obedient believers as we are now!
Are you really going to try and tell me that that wasn’t the Holy Spirit (Ruach HaKodesh) you felt all those years in Christianity!? You’d better not, you know better (Mark 3:29)!

2.     After jumping into the Hebraic-ness of the Faith with both feet, embracing the customs, tradition, dress and lingo and you have your honeymoon phase, you begin to grow stale and ridged and begin to get rabbinic, stoic and duty takes precedence over obedience through love. Slowly allowing yourself to believe like the Pharisees and Judaizers that the traditions linked with Torah are on par with the Torah Mitzvot themselves! Feeling for example that if you do not wear a kippah, you’re sinning, or that something is wrong with you if you admit you hate gefilte fish, or that you like coffee house praise and worship better than Messianic music or if you do not don tefillin for every prayer you are sinning. This signals the closing of the openness you have to the Ruach HaKodesh and the increasing gap between you and your personal relationship with God! You can’t hold hands with your lover while your hand is grasping a manmade book of rules. Even if we do not keep tradition but follow Torah we oft times forget that the Torah is a Ketuvah (Marital Contract of Love) and not necessarily a books of Laws and Rules. Our sincere but misplaced zealousness has become our shackles.

3.     Comparing your life, practice and spirituality to that of a non-believing orthodox Jew and trying to conform your life to that of which you see yet do not fully understand or comprehend.  Why would you want to model your life after a non-believer that hates the Messiah who you love and whose Halacha you choose to follow? Some of us foolishly think the Orthodox Jew is closer to God and has it all figured out because they never got rid of the Torah. But without Messiah, they are just as lost and flawed as any unbeliever and disgruntled, angry gullible believers are falling for it and end up denying Messiah. Issues such as these quench (I Thess. 5:19) the spontaneity and move of the Ruach HaKodesh in our life.

I’m no wannabe who will eventually succumb to “Stockholm Syndrome.”  I am a Proud Torah Obedient Believer in Messiah Yeshua!

4.     Criticizing and making fun of Christians and Messianics for their ignorance  which God winks at (Acts 17:30) is like asking Yeshua and His Disciples why they don’t wash their hands or fast and it gives us a spirit of Scrooge instead of the Spirit of Messiah. Criticizing other Natsarim because they do not practice or believe exactly the way you do also makes our Christian days happier than our Torah obedient ones. Why? Because this is not humility but killer pride in its most self-righteous smug form.

Walking in the Torah Obedient Halacha of Messiah Yeshua and having structure that submits to the leading of the Holy Spirit that turns a blind eye to religious critics and taskmasters is the only way we can regain freedom and our happiness we had before we threw it out in a garbage bag at the curb along with everything else we labelled as “Not Jewish”.

If you’re not and I’m not happy; we have no one to blame but ourselves. I for one refuse to wallow any longer in the muck and mire of the religio-politico pigpen. I am going to be a Torah Obedient Believer in Messiah Yeshua according to His Word on my own terms in an intimate and personal relationship with Him and forget those who will dog me because I have made and use my own tefillin or if I like Keith Green and Jeremy Camp better than Paul Wilbur. I follow Messiah’s Halacha, not that of the Breslov or Lubavitchers!

I guarantee you; with this new Hebraic Year I will be happier as a Natsarim than I ever was as a Christian. I am making it a personal mission. I am going to live my life with abandonment for Him and not care who stands by to wag their fingers and tongues and cast stones at me. After all, I’m in a relationship, not a religion.

You have the chutzpah (guts) to be in?
Posted by Yehudah ben Shomeyr at 1:03 PM