Tribute to My Father; Bill Shoemaker 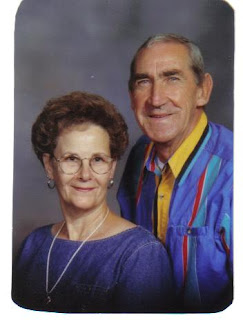 My Father, Billy Randolph Shoemaker grew up without a father, and was from a large, dirt poor Kentucky family. As a youth he was a high school basketball rock star, and as a young man served in Germany with Elvis Presley. He ended up marrying my Mom who already had two girls from a previous marriage. Not many men back in the 70’s would do that. But my Dad was not just any man. He loved my sisters as if they were his own and then I came along.

The last decade or so of his life he was very ill.

My Dad was not perfect and he had his faults like everyone else, but he loved the LORD with all his being and served him till his dying day. If he only knew how many lives he touched. I was floored when at the calling hours; the line was out the door and into the street. Over 300 people signed the guest book. And there were some relatives from Kentucky and elsewhere that was not able to attend!

He has been with Yeshua since September 5th, 2008. Though I miss him as much as ever I would not wish him back for the world, for I know he is well and whole with Yeshua and that I will see him again one day.

The following is a free verse poem I wrote in tribute to my father.

The Leaf was the color of maze, wilting and buffeted by the wind on the Tree. Canker worms had nibbled the edges and bore holes in the leaf here and there.

The Leaf was tired, its grasp weak and loose, like a fatigued climber hanging on the edge of a cliff with no one to rescue him.

The Leaf fell asleep and rides a spiral vortex to the ground below and what remained of the moist life begins to turn to dry brittle decay.

With a gasp of breath, like one breaking the surface of the water, or breaching the womb, the leaf awakens to find as if it were an all to real bad dream. Its color moist, green, radiant and vibrant; you can almost see the veins in its leaf pulse. It is whole. Even the strong wind that once buffeted feels as if it were a gentle caressing breeze. It’s grip as a stalactite.

The Leaf awakens to see bright, almost glowing Leaves he hasn’t seen since his dream which he only vaguely remembers; Leaves who fell asleep before he did and had been nearly forgotten in the mulch below.

The Tree he had occupied before was fading and sparse. But this Tree is lush, thick boughs and alive; though he cannot find the vibrant leaves that surrounded him before he slept.

The Leaf looks below to see if he can see the vibrant leaves he left upon sleeping and what should he spy, but a dim rippling pool, almost like tinted glass. He sees a pale, yet opposite portrait of the tree he now thrives from.

He sees as a soaring hawk who spies a grey mouse in the thicket of the field and sees those who surrounded him as he fell asleep now droop.

HE begins to see leaves from the faded Tree fall as if up, only to touch the surface of the dark mirror below and make ripples in the sheen of the glass only to disappear and instantly sprout near him, as if a butterfly spreading its wings as it emerges from the cocoon.

Then the Leaf notices that the wind passes through the collective foliage as if a flute. This Tree does not clap, clamor or rustle with complaint, but sings, vibrates like strings on a harp. The sheen of the collective Leaves is iridescent, shimmering a rainbow of color. Then the Leaf rubs its eyes only to wonder if he is not still dreaming. But he says to himself that he has never felt so “real” in all his life! He sees various different species of fruit hanging from the Tree in which he find himself. Even the Leaves are a collage of variety. This never occurred, that he noticed, in the Tree reflected below.

The Leaf then discovers an amazing thing. At will, he could close his eyes and open them to find him self at any point of the tree he desires. From afar it looks as if the Tree had countless dancing flames, for the Leaves traveled as he did at will from branch to branch.

The Leafs eyes began to examine the branch from which it effortlessly held to, and he traced it all the way down the trunk and he was awed at what he saw; a pattern as if black fire on white fire, and intricate design of an ancient holy tongue that weaved itself up and down and around the Tree making the bark look like a royal tapestry. And low and behold it appeared to breathe! As his eyes pierced the murky mirror below and as he continued to trace the Tree to its opposite image, the trunk appeared to be as chiseled, petrified stone, faded and peeling like the parchment of a birch.

Then he noticed the pulsing sensation surge pleasantly through him as if he could “feel” light! Warm serenity and indefinable love radiated through every fiber of his new being.

This he thought is the Tree of Life that Adam should have tasted first. This is the burning bush that was not consumed that Moses saw. This is the Tree that heals the nations in the book of Revelation in the World to Come.

Then my Dad realized he was finally home.

Posted by Yehudah ben Shomeyr at 5:20 AM